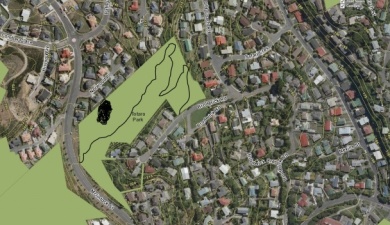 On 4 March, Penny Salmond & Graeme Sawyer from JCA accompanied Anita Benbrook, WCCs Restoration Technical Advisor and native Forrest expert, on a wander through the Totara Park, roughly on the same route as the proposed new walking track through the park will follow (see accompanying image of map with walkway route). Anita surveyed the native plant species present, and while there were a few pleasant surprises in terms of species diversity, it came as no shock to anyone that none of the “original” canopy species native to the area were present at all, as seed stock for Tawa, Hinay, Rimu, Rata and Totara are just to distant for “natural” dispersal to reach the area.

Thanks to Anitas survey, we can complete a “gap analysis” and she can now help JCA develop a planting plan, starting with a couple of hundred trees this winter (pretty much whatever species WCC has available) , and a few hundred more the following year (as other species like Rimu and Tawa become available from the Berhampore nursery). Anita will also arrange for us a seed gathering permit, which will allow us to gather seed from reserves like Wiltons bush etc in order to “locally source” some natives for seeding into the park.

We also walked along the top edge of the park, and reviewed the significant chunks of the bush edge that have been cleared by neighbours on norwood place, in order to preserve their harbour views and expend their yards. Other residents on Broderick road have complained at least twice in 2013 to WCC about this illegal clearing on a WCC park, and those neighbours have been warned by WCC to “cease & desist” modifying a public park full of regenerating native bush.

Part of that area on that ridge-line – a very short walk from the footpath at ‘Hampton gate” entrance on Mclintock St- is almost flat and well mown with excellent views over the top of the park to Johnsonville and the harbour. So JCA will nmow revise the plans for Totara park to extend the project to include a small picnic area on this site (its the only flat area in the entire 2.3 Hectrare Park) , so locals can enjoy the view, and the regenerating bush. This will be an important focal point for track builders over the next two yerars, being an ideal spot for  ‘smoko’ –  once the track build gets going later this year (a vital consideration!!)

We hope to have the MoU with WCC to build the track will be finalised in the next couple of months, and the early stages of planting and track construction should commence before June 2014. This entire project is about Johnsonville citizens assuming responsibility for their own green-spaces and recreational facilities, because years of disappointment have shown us that WCC priorities are elsewhere, and the only way we’ll get any assistance from them now is if we lead can encourage their partial support.

Getting immediate neighbours to Totara park on-board will be a critical next step, as we hope they will become Totara parks biggest allies in terms of weed, pest and vandal control (to protect and enhance what we will plant and build in the coming two years).

JCA is co-ordinating construction and planting, and WCC will agree to provide some materials for the track build, and plants, but there is ample opportunity for the Johnsonville Community to be involved in this project: Contributions of labour, cash, and corporate sponsorship of picnic tables, sign age and numerous other sundries are very welcome, and all enquiries may be made through JCAs website at http://goo.gl/irmt4D

JCA is doing all it can to lead and foster projects like this around the edges of the suburb, and certain WCC councillors have acknowledged publicly that Johnsonville residents have been hard done by in recent years, with massive residential intensification plans thrust on them against their will. The need for more and better green-spaces to offset the effect of what could look like a “concrete jungle” in 20 years if current planning and development trends continue, is critical if the liveability of Johnsonville is to be maintained.

JCA was devistated last month to have WCC Strategy and Policy Committee Councillor Lee and the Mayor Wade-Brown vote to reject JCAs offer to create a new community funded and built green-space on 420 square metres of road reserve at the corner of Cunliff St and Ohariu Road. “This was a community led initiative to create the first new greenspace in perhaps 40 years, and was voted down by Green Councillor and the Mayor, who instead chose to sell off the land to a private developer who eventually plans to build on the tiny corner site. “Our wholehearted thanks go to Cr. Sparrow and Cr. Pannett who acknowledged Johnsonvilles’ need for more and better green spaces and voted to support our community park proposal, but to those two “green leaning” folks who chose to sell “our” scarce public land put a few bucks in WCCs coffers (rather than help us to help ourselves) – not so much”.

“We are doing what we can” says Graeme Sawyer, “but what is really needed is policy changes from Council officers and representatives which prioritise and fund the development of new green spaces within the centre of Johnsonville – both in the town centre and medium density residential Area (MDRA) zones”.

An open spaces plan for Johnsonville town centre was promised in 2008, but despite regular requests from JCA, it still has not eventuated. “There has been no Public green-space in the Johnsonville town center since the mid 80s, when WCC “passed” on an option to buy the land on which a public park stood at the north end of the “Johnsonville triangle”. The site, once grass and trees circa 1985, has consequently been a “McDonalds” for nearly three decades….

Green-spaceis far to scarce in the area, and has actually shrunk significantly since MDRA was formally introduced in Johnsonville only 6 months ago; The new Keith Spry Pool extension has swallowed part of Johnsonville memorial park, and a massive part of flat playing feild space at Alex Moore Park is currently being asphalted by WCC for car parking!!).

“For central Johnsonville, only a very bold and significant change in policies can begin to reverse that trend in green space destruction, for a suburb whose central area population will double in the next 20 years. Whether that is funded directly through rates, or (better still) through development contributions from higher density developments, it desperately needs to happen, and soon!!”.

The project has a lot of hard work ahead before its finished, but once the Totara park project is completed. In about 2 years, JCA look forward to further extending reforestation and linking walkways across adjacent (and badly neglected) park areas between Mclintock St and Broadmeadows.

This entry was posted in Natural Environment and tagged Parks, revegetation, Totara Park. Bookmark the permalink.