Update on JCA discussions with councils about bus stops in Johnsonville 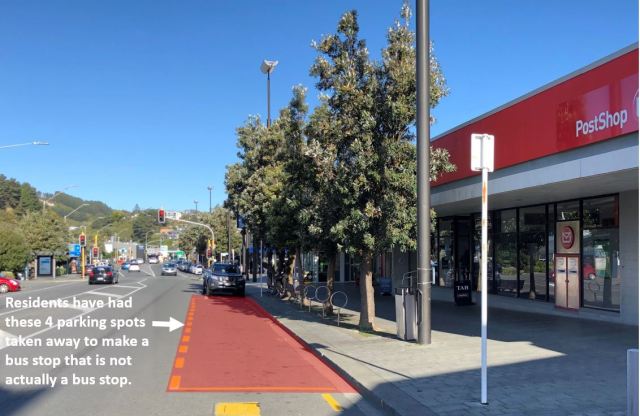 Johnsonville Community Association has finally gotten Greater Wellington Regional Council to agree with JCA about the so-called “bus stops” on Johnsonville Road — especially the one outside our Post Office.

These have been designated and marked “bus stops” but, as everyone knows, they are not actually bus stops because no buses stop there for a scheduled service or a public purpose.

Meanwhile, Johnsonville residents lost FOUR useful car parks on our main road right outside the Johnsonville Post Office. (Just a random thought: might this be detrimental to the busy-ness of the Post Office?).

Back in December 2018, JCA wrote to Wellington City Council (WCC) to point out that nobody uses these bus stops, and to ask for them to be returned to public car parking. Mystifyingly, Greater Wellington Regional Council (GWRC), who run the bus service, opposed this correction, claiming the mis-labelled ‘bus stops’ might be used in the future as real bus stops!

The good news: there is hope that we will get soon our car parks back, after JCA’s persistence with GWRC officers, including (in June) a presentation to the Regional Council’s Transport Committee (pages 56-57 of the Agenda). the Regional Council’s response was positive since they offered to return these bus stops to car parking as an interim measure.

Another key issue is the GWRC plan to shift Johnsonville Bus Interchange Stop A from beside the railway station to outside the new library across the road from Bus Stop B (see image).

JCA is very concerned that, without a light controlled pedestrian crossing, many more people will try to cross between these bus stops. This will be dangerous.  JCA is trying to stop the GWRC from moving this bus stop until WCC builds a safe pedestrian crossing.

3) Shelter from wind and rain

GWRC has submitted a road safety audit report of all bus hubs to NZTA for review.

Stating the blimmin’ obvious, passengers dislike getting wet and cold while they wait for buses at so-called major interchanges. JCA has asked GWRC to provide better (ie, actual) shelter from wind and rain at the current Bus Stop B. That’s the stop in the wind tunnel where the rain comes in sideways under the Countdown veranda. GWRC says it can’t improve them because they would have to dig up the current inadequate structure and build a new one to a new design.

(Ummm … JCA has been telling them about the wind for years, since well before design phase. They need to listen and do better.)

GWRC is thinking about adding another Stop D for southbound buses heading towards Khandallah near the Broderick Road bridge.

Stand by for more news on this in the Spring

Google me.
View all posts by Simon Pleasants →
This entry was posted in Uncategorized. Bookmark the permalink.