Alex Moore Park all-weather pitch nice BUT what about the parking and roads? 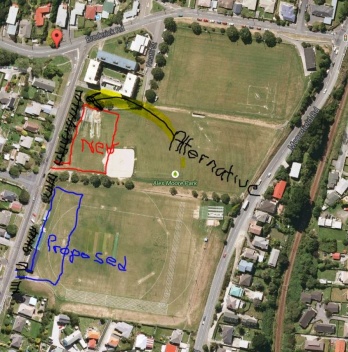 Plans for the New Alex Moore Park all-weather pitch are being marred by WCC under-investment in roads and car parks.

Alex Moore Park is receiving a new all-weather playing field. This pitch will be operational before this winter. Great news! …or is it??

WCC’s contribution to the supporting infrastructure – or lack of it – appears to be set to throw this promising new baby out with the bathwater…..

In order to provide parking for users of the new All-weather pitch, WCC is laying asphalt over two large sections of flat playing field space, and transforming it from sportsfield into parking lots !

Why is this necessary? Because four years ago, WCC banned parking on Broderick Rd. (they put double-yellow lines on the south side of the road) while repeatedly declining JCA and Johnsonville sports clubs’ repeated requests for mitigation – soecifically, more angle parking on Bannister Ave. would have solved the problem WITHOUT SACRIFICING FLAT PLAYING FIELD SPACE!

As a result, over-crowding of existing Heath St and Bannister Ave parking area has ensued over revent years (These areas are typically filled with “unofficial” par-n-ride commuters, as they have nowhere else to park…WCC and WRC refuse to increase park-n-ride, but thats a whole other story…) Traffic mayhem and unsafe driving and pedestrian activity has ensued, because WCC failed to take responsibility for a parking crisis they created.

In refusing to provide new and appropriate parking on Bannister Ave., WCC said it was “too expensive” to build the modest retaining wall structures that such parking would require.

Who then will meet the opportunity cost of Johnsonville sportsfields being asphalted for “cheap & easy-build” off-street parking?Johnsonville residents do. Rather than increasing Johnsonville’s recreation areas and sports “acreage”, these areas are shrinking rapidly as WCC opts for cheaper parking on premium flat playing field space. Rather than creating well planned (but slightly more expensive) parking solutions for Alex Moore park, our “green dominated” council is happy to “pave paradise and put up a parking lot!

Despite promises of a half-million dollar spend on this initiative, just $300,000 is now to be spent on landscaping and a loop walkway around the perimeter of Alex Moore Park. Great! But – is this WCC finally using out rates money to invest in quality infrastructure? No. This is being funded not by WCC, but from the Plimmer trust.

This new playing field is not just for Johnsonville, it’s for the entire north-Wellington area. And users will flock in from adjacent cities too. Additional pressure on traffic will be considerable. The new “Johnsonville Triangle” roading improvements are scheduled to begin this year, but WCC has budgeted just $ 5.7 Million for a roading upgrade estimated to cost $ 14.5 Million (a massive $ 8.8 Million shortfall in funding).

WCC has the power to allocate the full $14;5 Million at the sttroke of a pen, but it stubbornly refuses to do so. Even if it were fully-funded, WCCs design does not plan for the necessary widening of the eastern section of Broderick Road to cope with teh renewed traffic to the new all-weather pitch, or top cope with teh “new” thru road from cortina ave to Ohariu road.

We are pleased that a new all-weather pitch is being constructed, but the failure to put adequate roading and parking infrastructure in place, and the decision to pave flat playing field to improve parking, represent MASSIVE flaws in planning and in investment.

Key to all of these issues is WCCs ongoing failure to invest appropriately and adequately in Johnsonville infrastructure. JCA says WCC needs to substantially improve funding – for roading- for parking – and for recreational and natural infrastructure- to ensure permanent quality solutions that don’t sacrifice Johnsonville’s green spaces and liveability as the pressures of intensification bite in Johnsonville.

WCC eliminated a considerable number of parking spaces immediately adjacent to Alex Moore Park four years ago, and did nothing to address that deficit. Feedback to WCC opposing this, and requesting mitigation (from JCA and sports clubs) was ignored.

Now WCC are putting in parking, but rather than angle parking on Bannister Ave (a space-efficient and sensible solution) they are PAVING substantial swathes of our precious Alex Moore Park in order to correct a parking deficit that they themselves created!

Landscaping is an issue JCA is very concerned about – we want indigenous natives – not the ubiquitous Pohutukawa, which is hardy, but NOT native to Wellington at all.

Eliminating precious playing field and green space in order to provide CAR PARKS is the exact opposite of what Johnsonville wants and needs as it is set for massive population growth over coming years. WE SAY WCC needs to spend more to provide permanent and quality solutions to Johnsonville’s severe recreational and green-space infrastructure deficit.

This entry was posted in Built Environment and tagged Recreation, Sport. Bookmark the permalink.